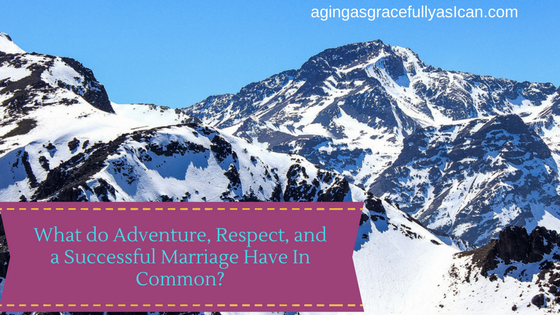 Marriage is an adventure.

Long term marriage is a terrific adventure even if I am being metaphorical.  It is not to be taken as an easy storybook romance.

One time when Husband and I felt as though we were trapped alone with each other in Antarctica, and were thinking of calling for rescue to take us our separate ways, I ran across a YouTube video that changed everything. I’m not using hyperbole here, this video changed how I viewed my husband, myself and my marriage.

The video talked about husbands and wives needing completely different types of expressions of caring.  Not in just a Mars vs Venus type of way but in a more visceral way backed by loads of science… and the Bible.

Dr Emerson Eggerich had an epiphany when he read Ephesians 5:33-

“However, each one of you also must love his wife as he loves himself, and the wife must respect her husband.”

With that little verse, the skies opened up for him and he saw that for a successful marriage, women primarily need

Now before you jump on me with, “we both need love and respect” or, “but my husband doesn’t deserve my respect”,  Eggerich writes in his book Love and Respect –

“When I talk about respecting your husband, I do not mean being a doormat.  I do not mean burying your brains, never showing leadership ability, or never disagreeing in the slightest way.  I do not mean that he is superior and you are inferior in some way.  Nor do I want you to ignore your hurts and vulnerabilities”.

What he posits is a method to talk, communicate, express our feelings with respect.  Most men “would agree with the biblical proverbs that says it is better for a disrespected man to live in a corner of the roof or in a deserted land than with a contentious woman” (Proverbs 21:9)

Was I a contentious woman?  You betcha’ because he deserved it – I thought.

But what if I changed my method?  What if I stopped viewing myself as a mother, always harping on what he didn’t do and started showing him respect?  Isn’t that what I do for my friends and employees? Surely I must respect him for something?

With regard to husbands, he teaches them how to show love to their wives.  Most men say that they would die for their wives so why won’t they help more around the house?  Because they don’t understand that housecleaning or _____________ (fill in your blank) can be a critical expression of love for a woman.

The idea hit me like a bolt.  I had become a shrew, and I disliked myself for it, but I didn’t know how to change our landscape. Husband and I were caught in what Eggerich

refers to as the Crazy Cycle…I don’t feel loved so I disrespect.  He doesn’t feel respected so he treats me indifferently.  Then I disrespect.  Then he, well you get it.

I purchased his book, Love and Respect, then the DVD’s- a small sum for such a big reward. With words from the book, I started to express the minuscule respect I had buried deep inside.  The results were short of miraculous.  Conversation, real communication and the beginnings of change.

Of course, bad/sad marriages may not be fixed just by a video, a book, or a DVD but these things, with this particular message, can and did, put a marriage on a strong enough footing for repair to happen.

Like any adventure, one needs adequate tools, skills and equipment in order to get through the jungle or out of Antartica successfully and the message of the Eggerich’s is among the most critical of all three.

Married for decades and Still in Love,
Beth
*