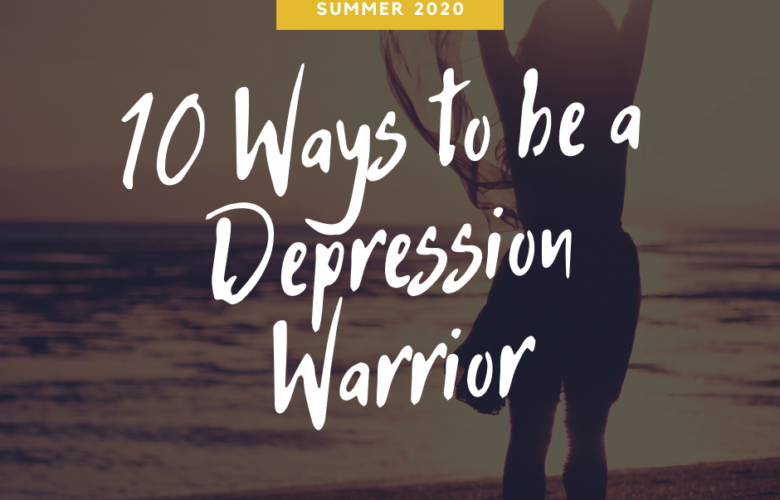 I have to say right up front what we all know,  that 2020 has not only been a challenge but 2020 has just been butt ugly.  As awful as it’s been for me, it’s been much worse for a lot of other people.  It has put me in mind of a time a few years ago when my darling husband and I spend our first year  on top of the mountain in Vermont, buried for months under 14 feet of snow and shivering with below zero temperatures.

I learned a thing or two about myself and about depression that winter.

I learned that depression needs to be taken seriously.  I learned, that even though  I didn’t want to fight back I could.  I learned that there were 10 things I could do to fight like a warrior, because that’s what I needed to do.

During that time if I had let myself my blog my titles would have been:

I did not slide gently into my depression. I thought that I fought it with everything I could but I had never encountered such relentless despair. I was angry that I felt it.  I was bored with its constancy. I was overwhelmed by the way it overwhelmed every part of my life. I bore down, gritted my teeth and refused to admit that I was so miserable.

On top of it all since I had never experienced real depression, I felt guilty about all the trite advice I had given to my friends who had.  I clearly just hadn’t understood, until I did.

I was diagnosed with a whoppingly severe case of SAD (seasonal affectiveness disorder).  Not all SAD cases are as critical  mine became, but moving onto a rural mountain top where I was isolated, the endless grey of a long winter (it snowed until mid-May), my husband’s surgery,  the tragic suicide of a friend, and being blind in one eye so I was only getting a fraction of a fraction of the limited light, left me an unsuspecting candidate.

In a way, I was very lucky because shortly after the sun reappeared my depression disappeared. My depression had a beginning, a middle,  an end, and a clear reason.

I wrote a post about the symptoms of varying degrees of depression, Depression and the Midlife Woman which is about the science of the disease.  Suffice to say that depression is not just blue of spirit, it is the black hole of the spirit, it is chemical, physical, and emotional.  It touches every part of the sufferers  life.

Beyond what the medical professions says, here’s what I learned about personally becoming and being a depression warrior:

I got the next two from Dr Daniel Amen’s book Change Your Brain Change Your Life. Weird though they are, boy did they help.

8.   Listen to Baroque Music.  Baroque music (not just classical but Baroque in particular) has been proven to alter and calm our brain waves.  We can learn new things best and re-pattern our thinking while listening to the meter and rhythms of Baroque. I began to listen in the car, on my phone, while cleaning and for that time my spirits felt lighter and even bearable. I swear that I could almost feel my brain healing.

9.  Find a scent that you really like and keep it around. Our sense of smell is the only sense that goes right to the part of the brain that’s overworking . Smell can either aggravate or calm immediately.     I found Frankincense so immediately soothing that I added it to my face cream, spritzed it on my pillow at night and put drops on a hanky to breath in. In truth, I started carrying am old-fashioned hanky just so I could use Frankincense that way.  Now that we are all wearing mask, put a drop or two of scent  on your mask.

I was amazed how quickly uplifting and soothing it was.

In case of emergency breathe in a pleasing scent.

Adding talk therapy and medication will significantly reduce your suffering both in time and depth.

The dragons in your brain will tell you that you are weak and need to fly alone.  Don’t listen.  The dragons will tell you that medication means that you are doomed to an insanity that will keep you from humans.  Don’t listen.  This is one time when you need to really be tough with yourself and fight for your life, because untreated depression is a life-threatening illness.

We live in an age of technological miracles, we can ZOOM therapy sessions. Right now, because 2020 sucks, support is offered on Facebook, LinkedIn, Twitter and other Social Media. With very little effort safe,reliable, and responsible help can be found. Don’t stand like the one legged tin soldier, alone waiting to be melted down, please reach out.

Just because I got lucky and the sun came out and my misery lifted almost over night, doesn’t mean I’m safe. I need to remember.  I need to document what has been learned because once the brain has been wounded by depression, it’s likely to return.

We’ve been strong enough to make it this far,